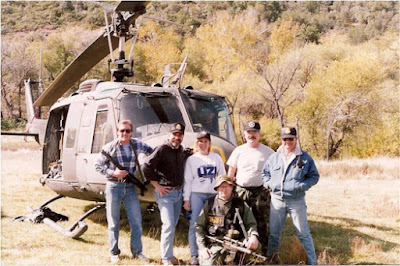 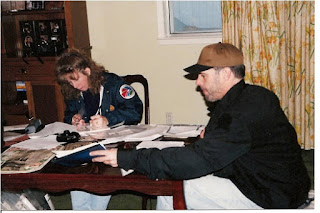 Deaver described the challenges of being one of the only women in the field. She often struggled to gain admiration from her team, especially as a supervisor.

Drug dogs and K9 officers surrounded the Louisiana auto shop. Over the last few months the owner had been visited by an airline hostess who had regularly purchased cocaine from him.  Now she stood across from him and revealed her true identitiy as a federal agent for the Drug Enforcement Agency (DEA). 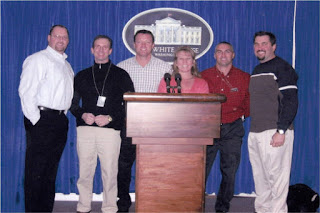 Michelle Deaver broke into an industry that was almost exclusively male and paved the trail for other females that desired careers in the drug and law enforcement agencies.  She epitomizes what it means to be a Sophisticated Rebel!!   I have so much respect, admiration and gratitude for her.  I am honored to be able to share her inspirational and energizing story with you... 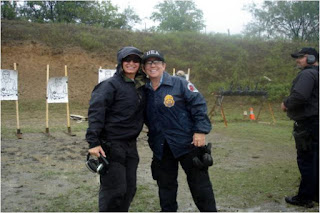 "As a female it's very difficult, because you have to have the male agents respect you and you want to be part of them, so you have to work very hard to earn their respect."

"I was born and raised in Southern California by parents who instilled success in their three daughters.  I began my college experience as a “rebel” and sought a career with the US Forest Service and attend Humboldt State University where the redwoods meet the coast in Northern California.  After a dismal summer job in forestry, I decided to transfer to Cal State Long Beach to finish my degree.  I was introduced to the criminal justice system by a professor who encouraged me to apply for an internship with the US Customs Service.  I graduated from Cal State Long Beach with a degree in criminal justice and worked fulltime for the US Customs Service.  I was hooked.
While with the USCS, I developed a great ability of reading people and observation skills.  At 23 years old, I decided that I wanted to be an investigator and applied to three different federal agencies.  I had offers from all three and decided on the Drug Enforcement Administration.  My decision was based on their need for female agents not their filling a quota demanded by the government.  My time at the academy in Glynco, GA challenged me physically and mentally.  There were very few females in the agency at that time so we were always watched and critically judged.  There was never a time at the gun range that I didn’t have a range officer behind me, watching to make sure I did everything right.  It actually made me work harder and I was a terrific marksman and in great shape because of the challenge.
I spent the next 7 years working in Los Angeles, New Orleans and then was transferred to Phoenix.  I was single at the time and probably worked 16 hours a day.  I was the only female agent at that time in the New Orleans office and did a lot of undercover work.  I did so much undercover work that sometimes I would go home at night and have to write myself notes about who I was portraying so I didn’t get my various undercover personas confused.  Mistakes like that could get someone killed.
Working in a law enforcement agency was ALWAYS a challenge.  It wasn’t that the other DEA agents questioned my ability; it was often the state and local law enforcement officers.  I was single, from Southern California and a female.  Three strikes in some minds, but I worked hard to prove my ability with passion and commitment.
I met my husband, got married and had two children while in Arizona.  I was transferred to Massachusetts so my family was uprooted and moved.  I was assigned to work a gang task force and worked from about noon to 2am.  It was a brutal assignment for me and my family.  The work was long and very dangerous.  My husband and I had certain codes in case we ran into any gang members who knew me so they wouldn’t see my family.  We became friends with a close group of people in Massachusetts and they were our reality release.  We remain friends 15 years later.
I was transferred to Dallas and was promoted to a Supervisory Special Agent.  I became interested in public speaking and would conduct numerous presentations to parents, teachers and community members on current drug trends.  I was often surprised on how ignorant parents would be on teenage drug use, so I really enjoyed helping them and teaching.
I retired from the Drug Enforcement Administration after 30 years of government service.  Not one to sit, I applied for and was hired as a criminal justice teacher at a school district career center.  My black and white personality was changed to grey as I saw what some teenagers have to live through at home.  I loved to influence high school students to become the best they could be and introduce them to the life that I loved.  I shared my challenges, sacrifices and successes.  My favorite saying was that I hoped that they could find a career where they could lay their head down at night and KNOW that they have made a difference.
My passion for making a difference continues as I apply to sit on the board of directors with a foundation whose mission is to help troubled and homeless teens.  I will see where this new adventure takes me.
I guess my advice to other females is to find something, anything and be the best.  There are always bumps on the path, sometimes boulders.  I guess what you do with those boulders is what defines you.  I would also encourage a release of tension, someone or something to help you through those hard times.  Everything is a balance and takes work.  But the payoff is a passion that always burns".
~  Michelle 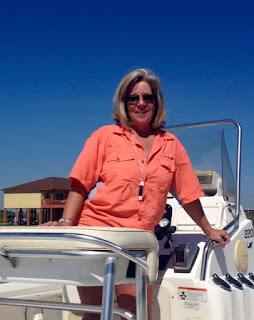 Michelle wearing her Forever Blade while enjoying on some well deserved R & R on their boat in Crystal Beach Texas! 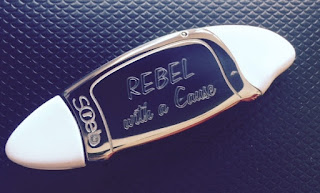